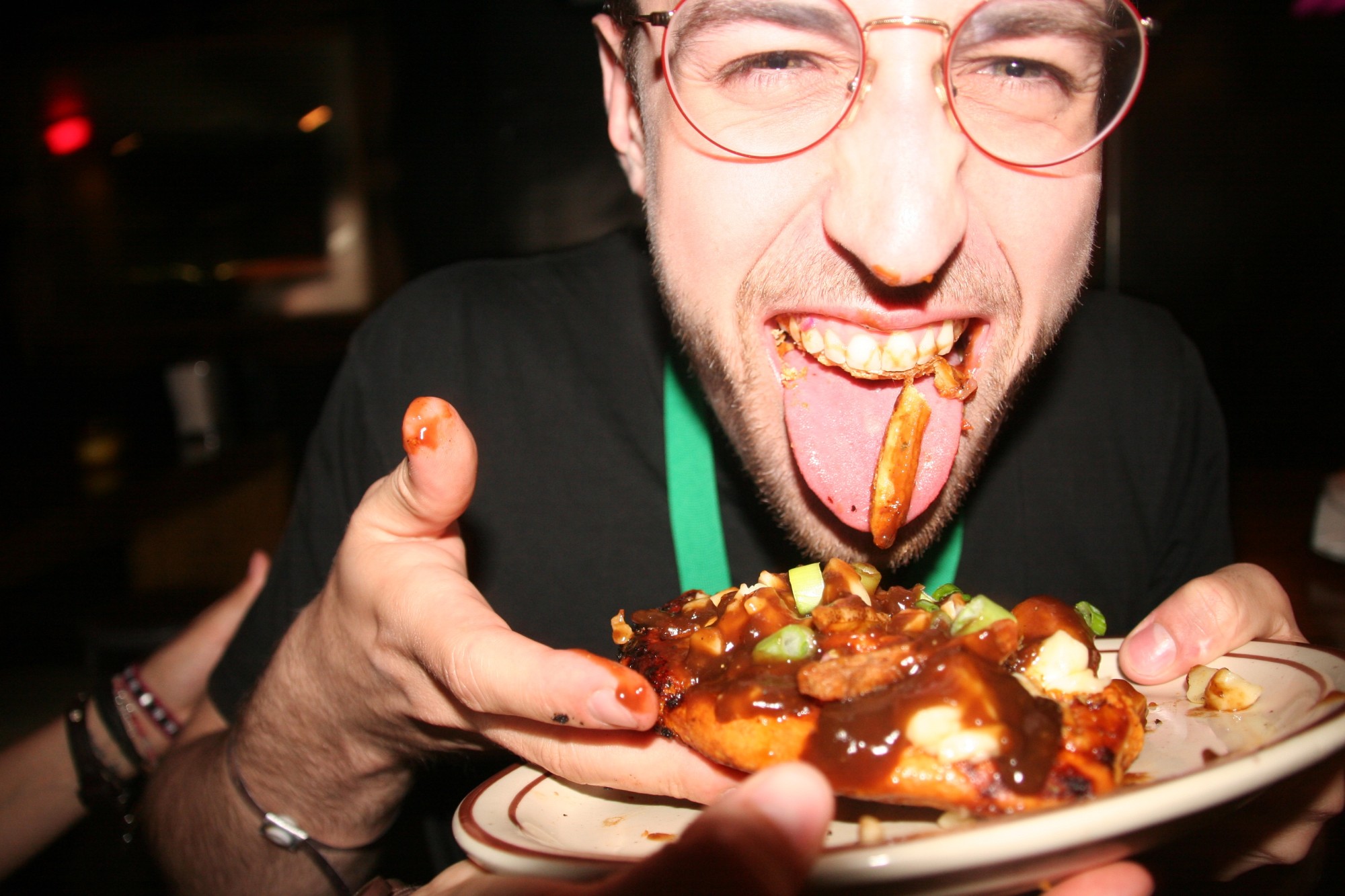 The sixth edition of Pouzza Fest, a Montreal punk rock festival, was held last weekend. We decided to see what it would be like to experience Pouzza as non-punk outsiders.

11AM : We wanted to stay true to the punk rock way of life so we thought we would say fuck the system and not pick up our media accreditation passes right away. By the time we finally showed up to the media table, we were greeted by a pile of garbage. 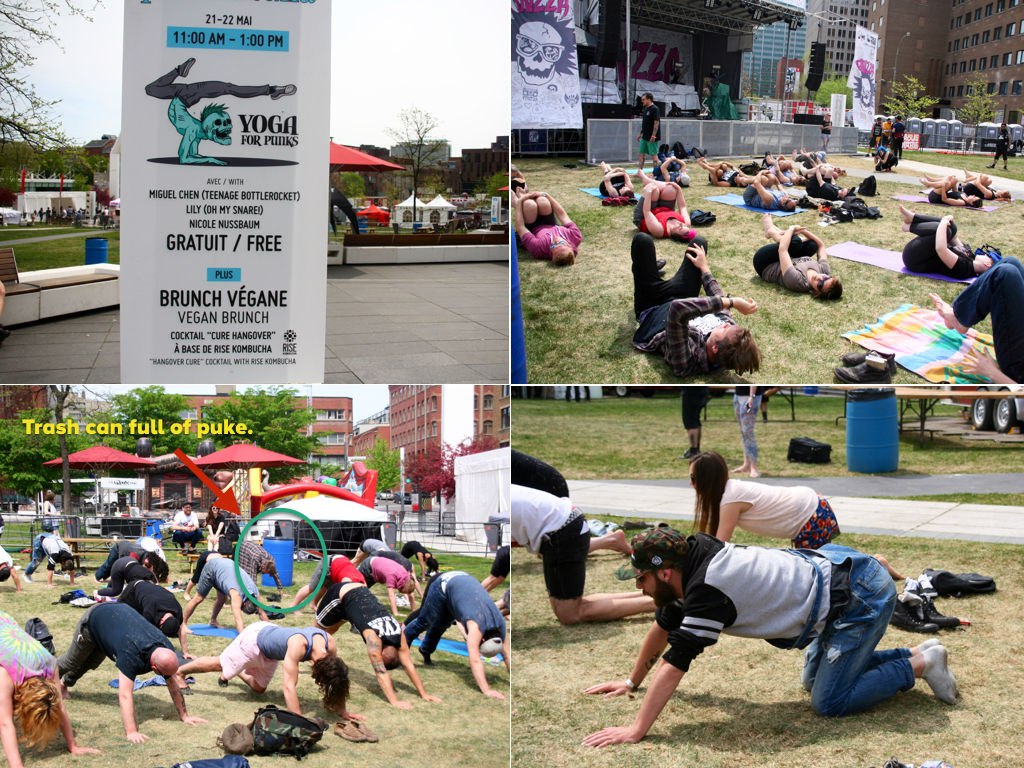 That Time When Punks Did Yoga and Drank Kombucha

12PM : Our journey began with a “yoga for punks” session in the Beer Garden. The class was held in the main square where a bunch of punk and ska bands performed the night before. Miguel Chen, bassist of Teenage Bottlerocket, made his way through piles of cigarette butts and trash cans full of puke to introduce himself as our yoga instructor. He started by reminding us that no matter how rebellious we are; we need to take good care of our bodies. He then guided a bunch of denim clad punks through some yoga postures before serving a nice vegan brunch and kombucha cocktails, making all the Mile-End hipsters in the crowd feel comfortable amid some of punk rock’s finest. 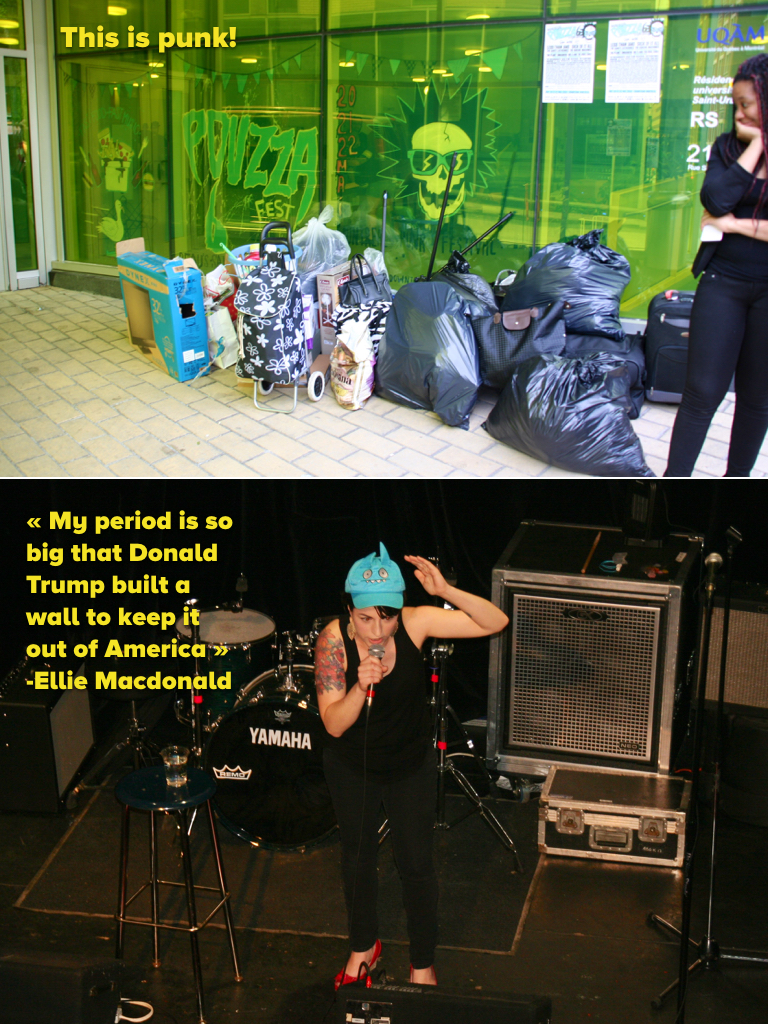 Punks Are Funny Too

2PM : Our punk chakras now in line, we grabbed a few beers and headed to the Ste Catherine Theatre to explore the world of punk comedy. Ellie Macdonald, a comedian from Nova Scotia, jumped on stage as we ordered two more drinks. She hit us with some period jokes, anecdotes about her daughter’s hypothetical murder and concluded by telling us how she ditched doing musicals to save her dignity. 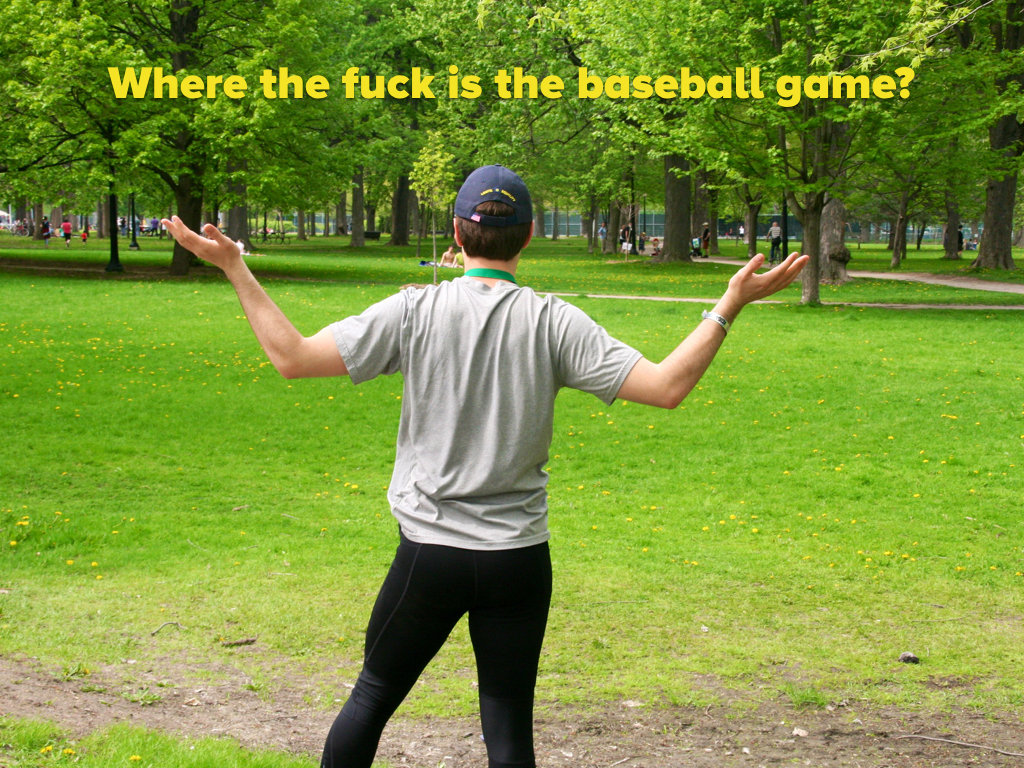 3PM : After our yoga session and a hilarious stand up comedy show, it was time for us to check out the Grand Slam charity baseball game benefitting the Montreal Children’s Hospital. Punks of all stripes came together to raise money for sick kids and to compete against one another on a baseball diamond for the ultimate grand prize of punk-rock baseball glory. At first we were a little dismayed to arrive at an empty baseball field at Parc Lafontaine (totally not punk). But it was at this moment that we realized that we were way more inebriated than we thought we were. It turns out the game was actually held at Parc Jeanne Mance a few blocks away. Oops. 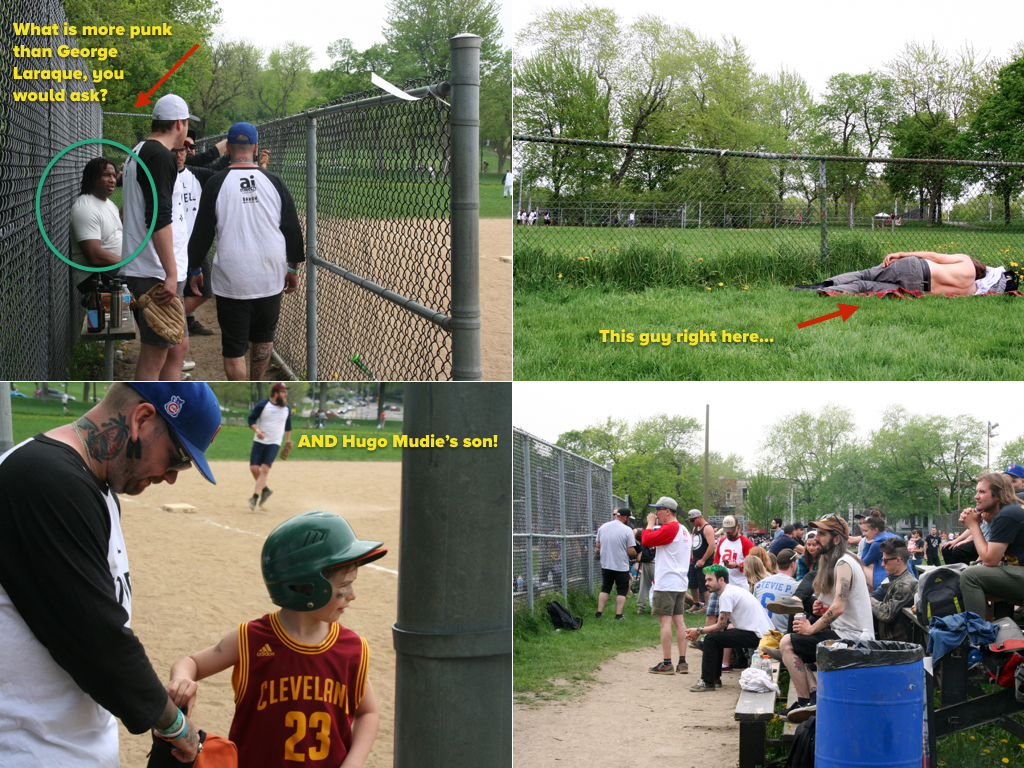 4PM : When we finally made it to Parc Jeanne Mance, we noticed that NHL player and tough guy Georges Laraque was coaching one of the teams! He also managed to stop the attempted kidnapping of a little girl that same afternoon and we were happy to find out that she came away from the incident unharmed thanks to Georges. The baseball game ended up being quite entertaining, but at the end of the day it is without a doubt Pouzza Fest co-founder and The Sainte Catherines frontman Hugo Mudie’s son who stole the show. Channeling his inner Lebron James, the little dude completely annihilated all the other players. 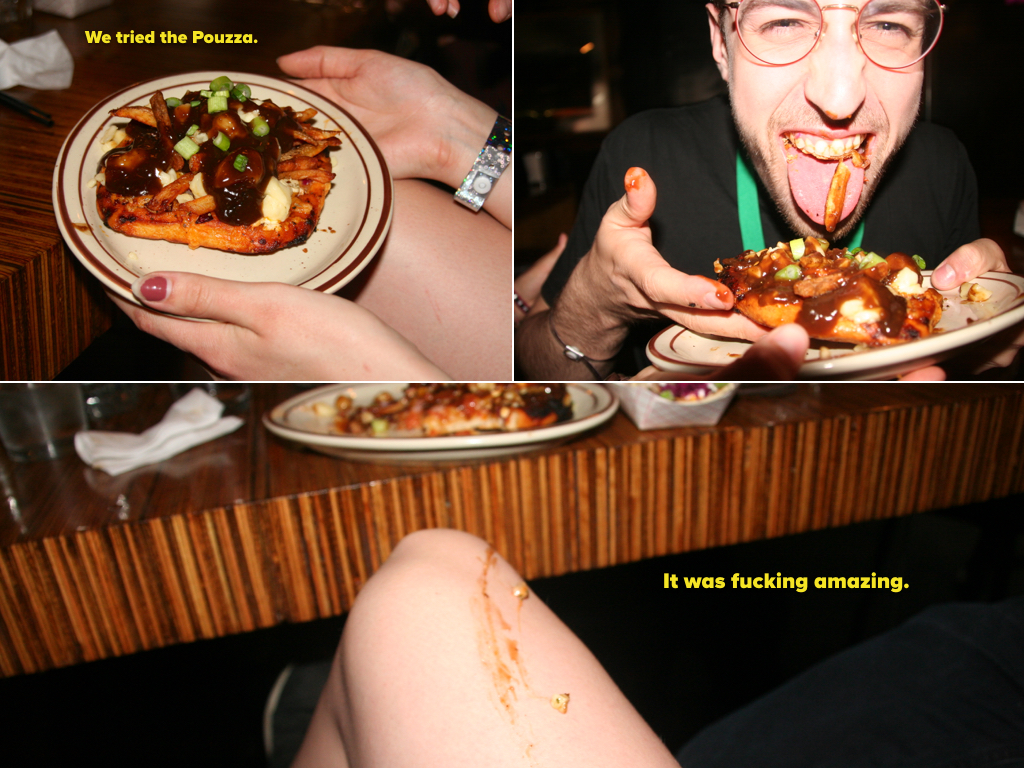 Pouzza: The Eighth Wonder of the World

5PM : After the game we decided it was time for a few shots of whisky and a couple of slices of pouzza, the infamous poutine and pizza combo that is the inspiration behind Pouzza Fest. It was pouzzalicious, 10/10. The waiter advised that it would probably be for the best not to get our salad tossed after feasting on pouzza. He also apologized for playing a punk cover record by Slayer. He was pretty punk. 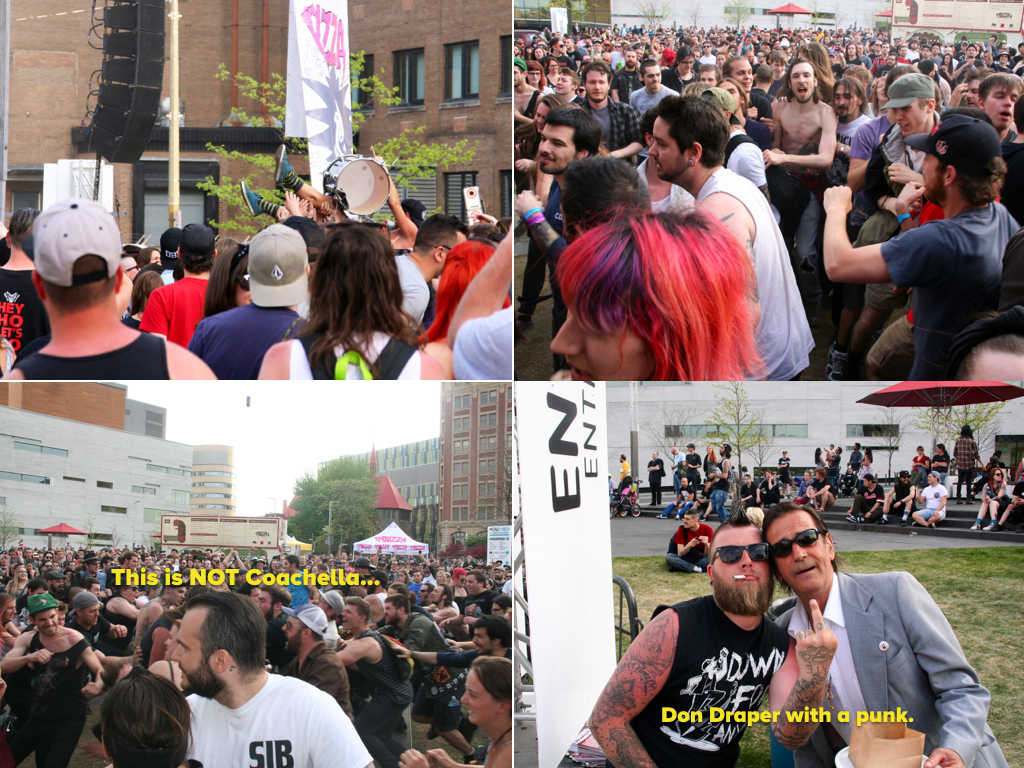 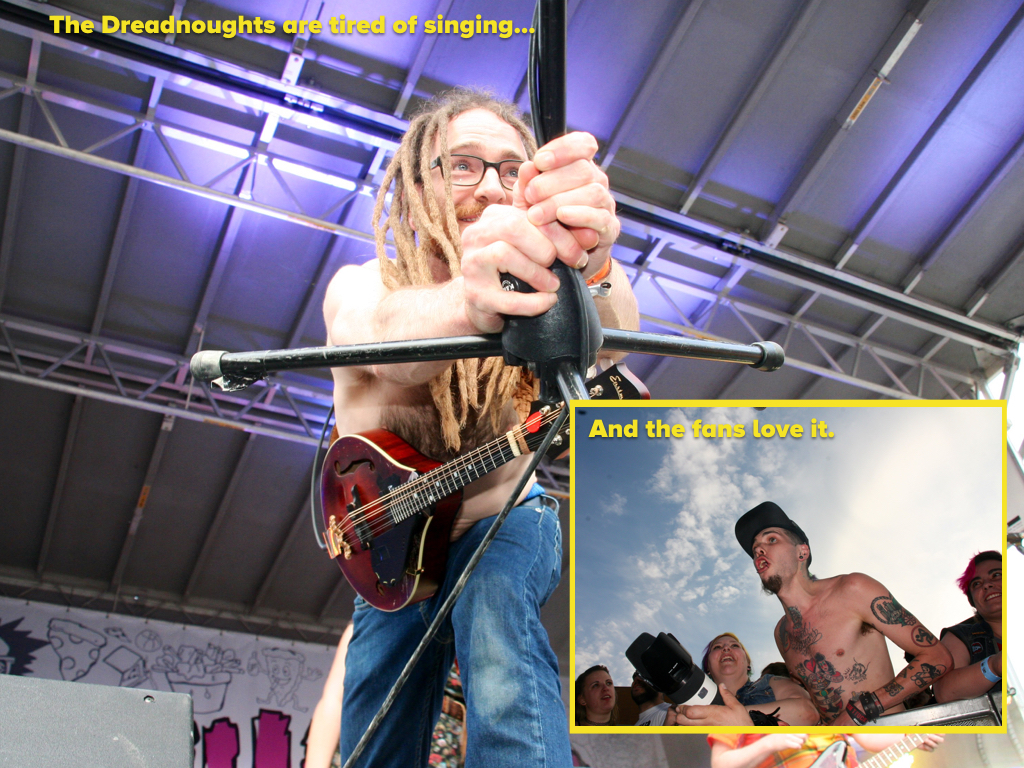 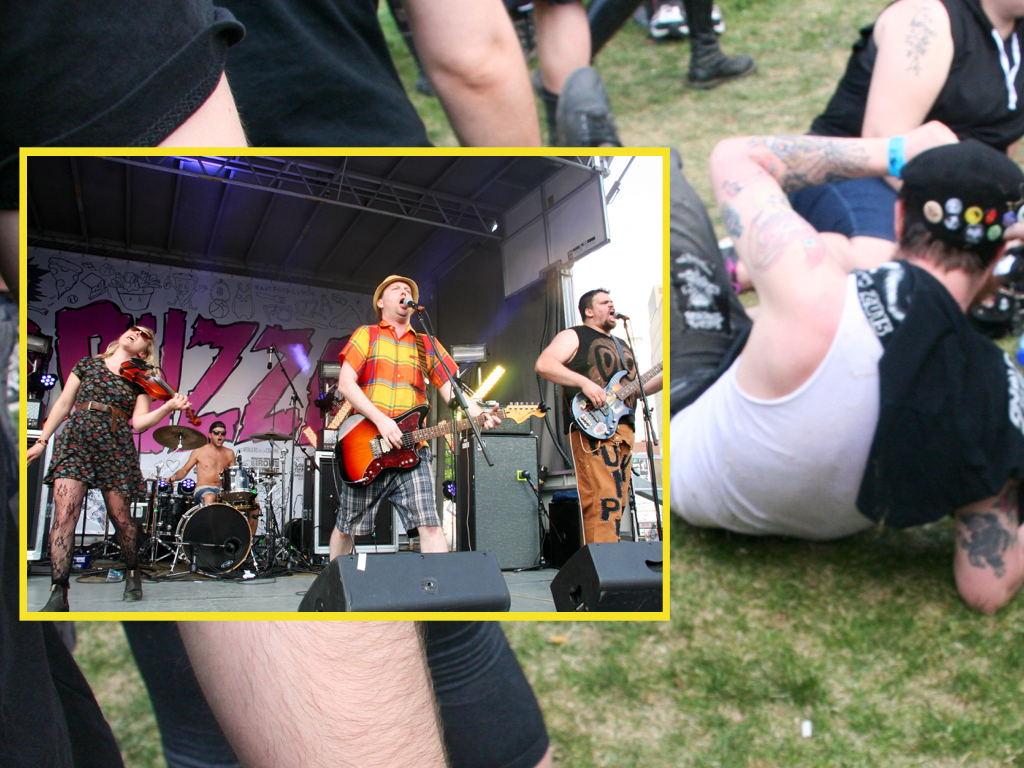 The Dreadnoughts Just Killed It

6PM : Back at the Beer Garden to see Vancouver folk-punk band The Dreadnoughts perform. The band highlighted that what really matters in life are Queen Elizabeth II’s hat choices and loving death. The band then called for a “wall of death”, which is what happens when the crowd splits itself in half like Moses parting the Red Sea, and then each side proceeds to run at each other, full speed. Imagine a giant game of chicken with hundreds of people. It was time for us to chug another beer and shout “fuck the government”. 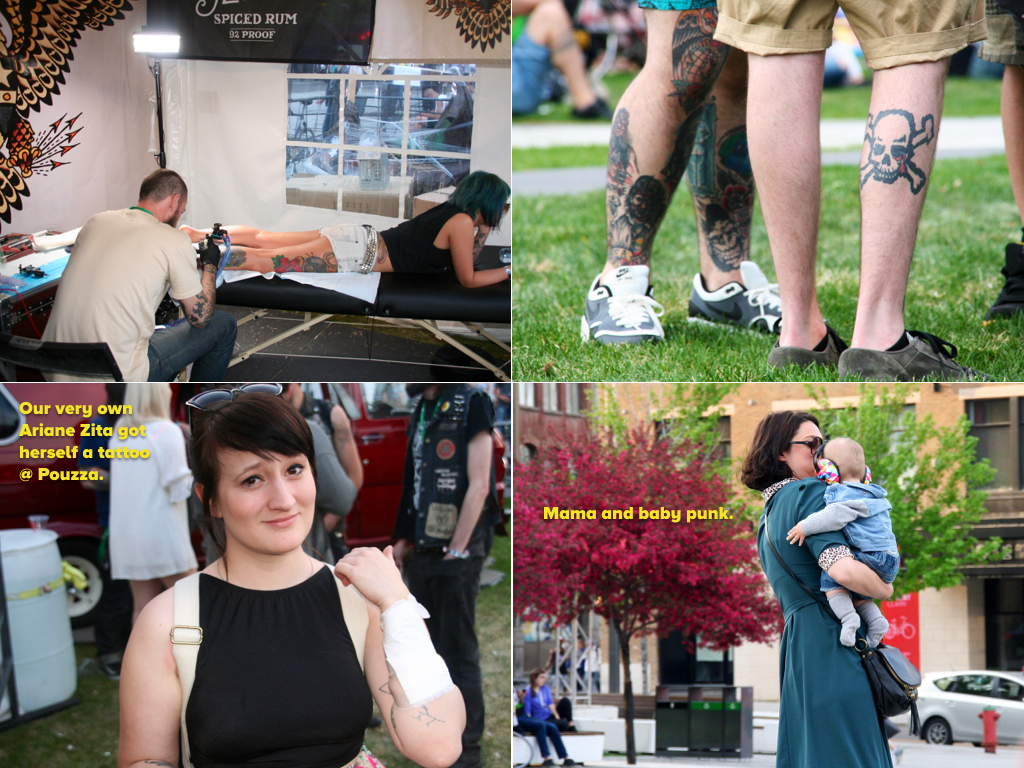 7PM : Local artist and Apollo’s own Ariane Zita got a panther tattoo during the show. We then grabbed a drink with her. She’s punk. We then asked a few festival goers to tell us what spring meant for them. The best quote we got was: “when a flower fucks with concrete”. 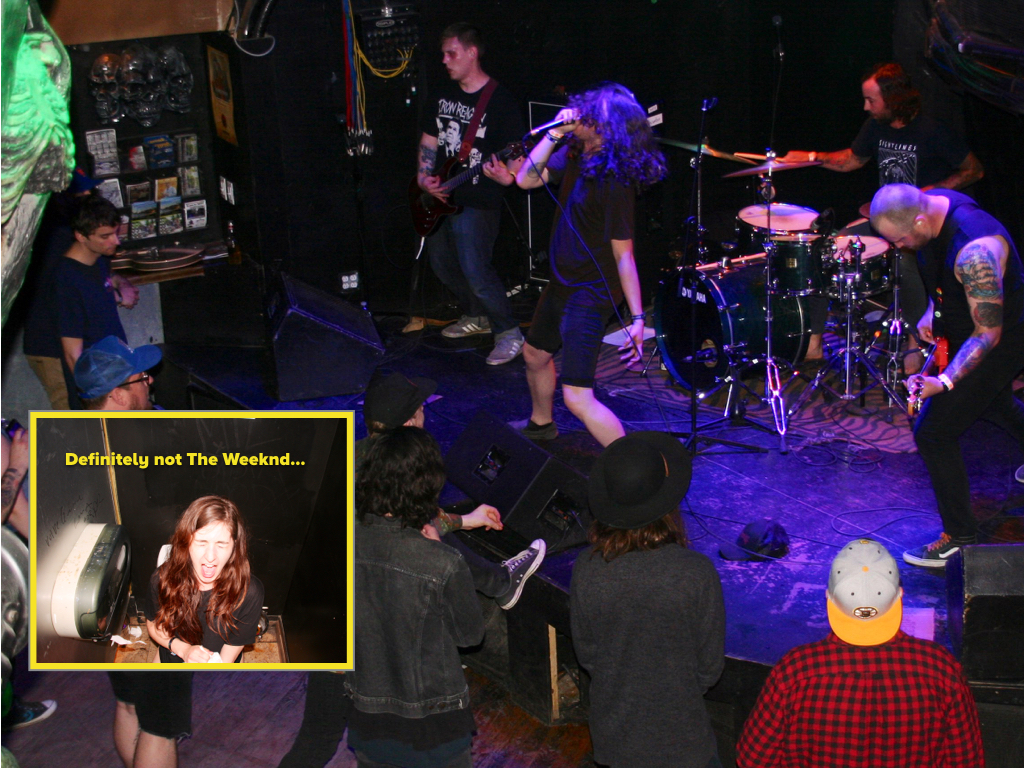 8PM : Completely smashed, we decided to take a look at the schedule only to realize that The Weeknd was playing! We figured that the festival had become so open-minded that they’d made room for some R&B! We arrived at the Katacombes and quickly realized that the Weak Ends from Saskatoon had nothing to do with the “I Can’t Feel My Face” singer other than the fact that I couldn’t feel my face and ears from all the hardcore screaming. We headed for the bathrooms to puke our pouzza out… After all the yoga, kombucha cocktails, stand-up comedy, baseball, pouzza tasting and The Dreadnoughts performance, we really thought we had made it. But the Weak Ends showed us that there is something for everyone at Pouzza, including hardcore fans.

9PM : We stumble into the first bar we see on St-Laurent for some shots and then… Well, we blacked out… We don’t remember how Pouzza 6 ended last Saturday, but I think we will remember the Saturday hangover until Pouzza 7!

Models with Down Syndrome Are Killing It in the Fashion Industry

Nolan on Zimmer, or The New Gospel of Film Music